Following the recent article in the Standard-Freeholder, by Mr. Donald Russell, Cornwall, it was felt that the following information about the Mille Roches Arena would be of interest to members and visitors to the historical society’s website.

This information is taken from the “Souvenir  Programme” , at the time of the formal opening on February 8, 1936. The following were the Officers for the arena board: President, George A. Butzer; Vice-President, I.G. Fleming; Secretary, F.E. Barkley; Treasurer, P.F. Johnston; Directors, W.S.  Fleming; Douglas Easter; Joe Robertson.

STORY OF THE ARENA

Always an enthusiastic hockey centre, Mille Roches now boasts of a covered skating and hockey arena which will  stand for many years to come as a monument to the progressiveness of a group of public spirited citizens of the community who, in the  fall of 1935, realized that there was an excellent opportunity for a  covered rink in Mille Roches, and undertook the formation of the Mille Roches
Arena Company, which resulted in the construction of the present arena, now enjoyed by skating and hockey fans of the entire region. 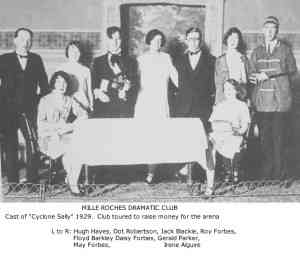 As a community enterprise,  the Mille Roches Arena has been a great success. Much of the credit  for the construction of the rink is due to the diligent efforts of  Floyd E. Barkley, who formulated the idea
of a covered rink in Mille Roches, and then, by interesting citizens of Mille Roches and Cornwall in the proposal, saw the usual open air rink fade into oblivion, and the present covered arena constructed. Mr. Barkley had the support of many Mille Roches and Cornwall citizens in the proposal, and it was not long  after the formation of the Mille Roches Arena Company in October, 1935, that shares were being sold by members of the company. 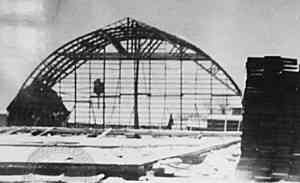 Construction of the arena was commenced on November 1, 1935, and contractors turned the completed job over to the arena company on December 19, 1935. Ice was made and everything was in readiness for the initial opening of the arena, which took place on Christmas Day, when there was skating and a hockey match. Strongly constructed of galvanized iron over a framework of imbers, the arena, which is located on the Tait  property, facing the county road running north of the village, is of the oval shape, and is 200 feet long, and 90 feet wide.

It has an ice surface 180 feet long and 75 feet wide, which is brightly illuminated by 21 500-watt lamps. Rafters  are so located that there is a clear vision of the entire ice surface from any part of the arena. The rink was erected at a cost  of approximately $10,000 and has a seating capacity of 860, and  standing accommodation for 500. 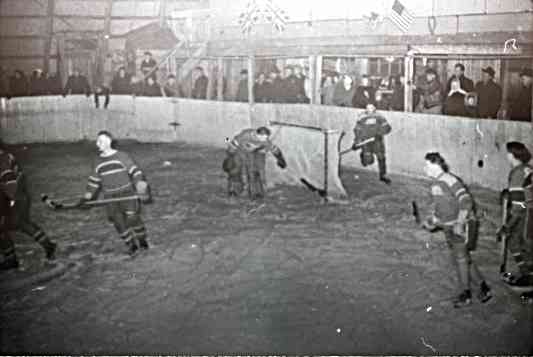 Spacious and  warm dressing rooms are located at the front of the arena, where there is also a refreshment booth. The arena is equipped with every convenience for both skating and hockey fans. A hockey score board and time clock is located at one end of the arena, while music on  skating nights is made possible through a special sound  system.  Thomas Gallagher and William Raymond, Jr., are in charge of the ice-making. 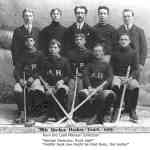 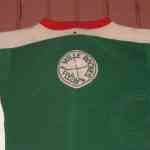 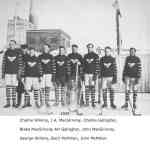 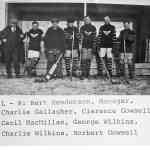 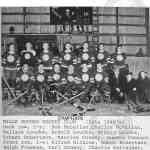 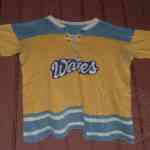 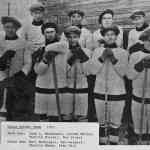 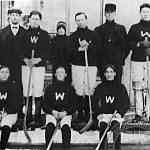 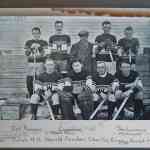 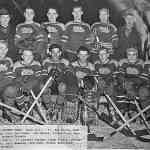 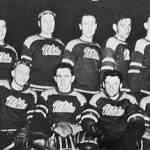 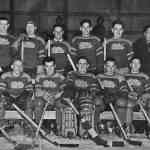 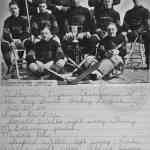 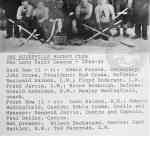 THE HOCKEY BOYS FROM MOULINETTE HOCKEY CLUB Connie (Rae) Applegate, a Lost Villages Historical Society member from Utopia,  Ontario, shared this poem with David Hill. The author is unknown, however we thank David for sharing it with us.

We are the boys from Moulinette town. There’s Charlie, too, and the Bisbee boys. And we take the ups and downs. They are always on the spot. Sometimes we win and sometimes we lose. They make a first class forward line, but we always stand our ground. And they are very good shots. We’ve played Mille Roches and Aultsville, too. Now Roy was there, and Murphy too. At Harrison’s t’was our turn to lose. They always work in fine. At Wales, we won and left them blue. But come and see you Carl in goal. But it may be their turn next. We’ll give you a shale of a time. We have the team, we all play clean. Should old acquaintance be forgot. That’s why we always score. With this hockey season over. We’ll play the game for our good name. Well here’s good-bye, for the town’s gone dry, and always ask for more. With this prohibition law. There’s George Rae and Wilbert too. They are always in the line. They are both com fed, so watch out for your head. They are there to do or die.