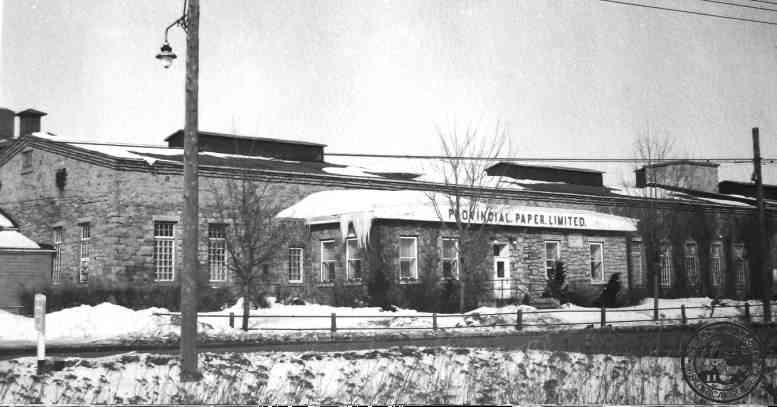 “Wellington Manson placed the first stone on the ground on Tuesday for the new papermill.”

The small stone mill shipped paper to markets across Canada but in a short time ran into financial trouble in 1909 and was bought by  Americans from Kalamazoo, Michigan. The new owners expanded the mill and by 1945 were employing more than one hundred workers. Then Provincial Abitibi bought the mill and produced paper from recycled paper and rags and the workforce increase to over 200. First called St. Lawrence Paper company the name was eventually changed to Provincial Paper and production continue until the seaway project in the 1950s.

PHOTOS FROM THE LYALL MANSON COLLECTION 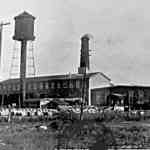 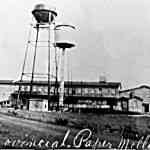 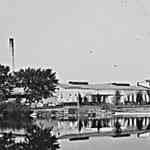 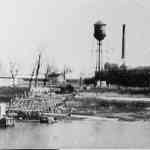 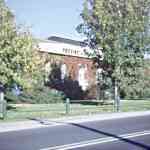 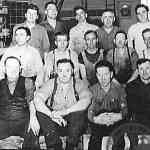 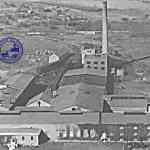 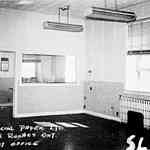 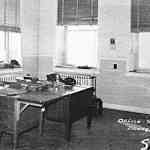 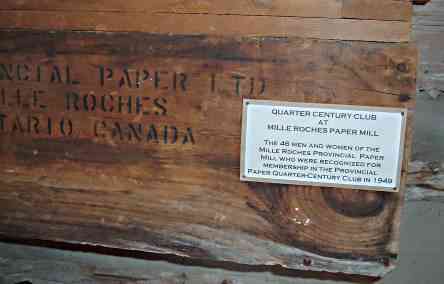 The note on the above wooden chest reads: QUARTER CENTURY CLUB AT MILLE ROCHES PAPER MILL

FROM THE MARION WILKINS COLLECTION 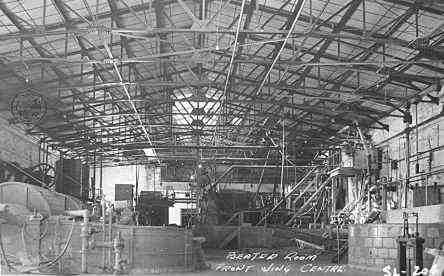 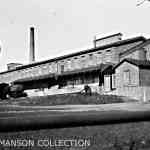 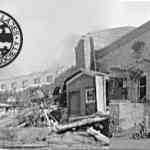 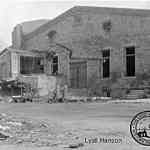 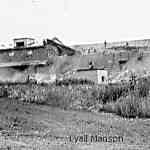 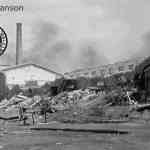 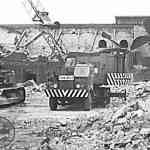 These photos show that at least on two  occasions there was a need to extend the water intake for the  papermill out beyond the old section of the canal and into the deeper water of the old riverbed when Bergin Lake was drained or dewatered for unknown reasons when these photos were taken.

It is likely that some maintenance was necessary on some structure along the Cornwall Canal or it was also the practice to lower or drain sections of the seaway system to speed up spring break up of ice.

The remains of the papermill are situated on land that is slightly higher than the surrounding area, the good thing is that today it is relatively shallow but this of course means that the current is going to be faster. Currents will vary noticeably depending on the level of the lake and how much water is going through the dam. BTW, just east and south of Strachen Island, or on Lock 20, there is little current because it’s all big water, regardless of how close the hydro dam may appear.

Most of the stone and brick walls were leveled off and the surrounding area almost has a landscaped appearance, no abrupt chances in elevation one would expect with the old foundations and structures like the rail docks.

During demolition a handy practice was to just shove debris through  holes in the production floor and into the basement. The boiler house with its thick walls of concrete was collapsed in on itself and the basement is full of large broken slabs with reinforcing steel rods (rusty) protruding out from the  edges.

Due to this site being so much larger than any shipwreck, there is enough left to see.

“back in the early 1980 and prior to the introduction of zebra mussels to the lake, a dive to the front of the papermill revealed a history of attention paid to detail when it came to the main entrance and surrounding flowerbeds”.

“With everything wiped  clean of any organic material one was able to see in detail that the original gate(s) and sidewalk had gone through various alterations and constant upgrading.  An older wooden gate post was carefully cut off just below ground level and extra concrete added to smooth the transition where the two sidewalks met at the road”.

“I haven’t been back to this underwater site since the introduction of zebra mussels but they are  notorious for covering hard surfaces and the surrounding area gets littered with their empty shells to the point were the finer details are totally obliterated”, John vanBaal